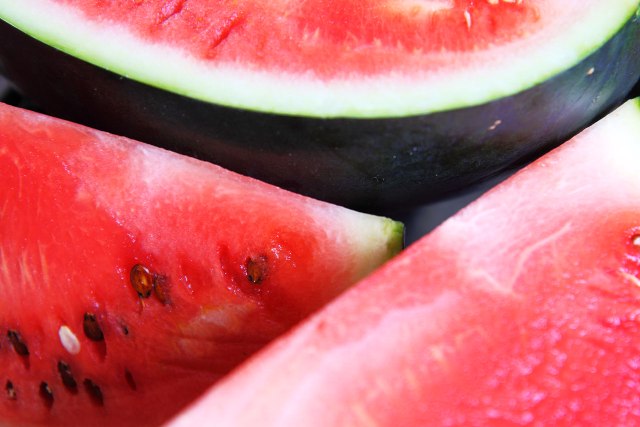 The watermelon originated in southern Africa. Today it is grown in Italy, India, Southern Asia, Europe, North, and South America (1).

The Watermelon (Citrullus lanatus Thunb.) refers to both the fruit and the plant of a vine-like (climber and trailer) herb originally from southern Africa. Watermelons are one of the most common types of melon. This flowering plant produces a special type of fruit known by botanists as a pepo, which has a thick rind (exocarp) and fleshy center (mesocarp and endocarp). Pepos are derived from an inferior ovary and are characteristic of the Cucurbitaceae.

The watermelon fruit is loosely considered a type of melon, although it does not belong to the genus Cucumis. It has a smooth green and yellow, exterior rind as well as a juicy, interior flesh that is sweet and usually red or yellow, but sometimes orange. The flesh consists of highly developed placental tissue that forms within the fruit. The former name Citrullus vulgaris, vulgaris meaning “common”, is now a synonym of the accepted scientific name for watermelon, Citrullus lanatus.

David Livingstone, an explorer of Africa, described watermelon as abundant fruits that grow in the Kalahari Desert, where they are believed to have originated. Today, the ancestral melon still grows wildly and is called the Tsamma melon or Citrullus lanatus var citroides. It is recognizable by its pinnatifid leaves and prolific fruit. Up to 100 melons can grow on a single vine. For this reason it is a popular source of water for the diet of the indigenous people. The flesh is similar to the rind of a watermelon and is often known as citron melon. It is however, distinct from the actual citron that belongs to the citrus family. The watermelon also established itself in the wild in Baja California.

It is not known when the plant was first cultivated, but Zohary and Hopf note evidence of its cultivation in the Nile Valley from at least as early as the second millennium BC. Finds of the characteristically large seed are dated as far back as the Twelth dynasty. In addition, a vast number of seeds were recovered in a tomb that appeared to be that of the Pharaoh Tutankhamen.

By the 10th century AD, watermelons were being cultivated in China, which is today the world's single largest watermelon producer. By the 13th century, Moorish invaders had introduced the fruit to Europe and according to John Mariani's “The Dictionary of American Food and Drink”, the watermelon made its first appearance in an English dictionary in 1615.

Museums in South Africa list watermelons as having been introduced to North American Indians in the 1500s. Early French explorers found Native Americans cultivating the fruit in the Mississippi Valley. Many sources list the watermelon as being introduced in Massachusetts as early as 1629. Southern food historian John Egerton has said he believes African slaves helped introduce the watermelon to the United States. Dr. Jerry Parsons, a horticulturalist, stated that slaves and European colonists disbursed watermelons over many years to various areas in the world. Parsons also mentioned that the watermelon crop was harvested by Native Americans in Florida by 1664 and by people living near the Colorado River area by 1799. Other early watermelon sightings include the Midwestern states in 1673, Connecticut in 1747, and the Illiana region.

Fresh watermelon may be eaten in a variety of ways and is also often used to flavor summer drinks and smoothies. Fresh watermelon is most often cut into slices and eaten raw. Additionally, it can be cubed and put in a fruit salad. Watermelons are also popular for making juices, daiquiris, margaritas, cocktails, many commercially available mixed drinks, and multivitamin beverages.

The watermelon is used for making pickles, and because of its high content of pectin is popular as a constituent of jams, jellies, and other gelled preserves. Grilled watermelon, known as watermelon steak due to its visual similarity to raw steak, has started to become a popular item in restaurants.

Watermelons contain vitamins A, C, B6, B1, folate, niacin, and dietary fiber in the form of pectin (1). They also contain manganese, selenium, copper, sodium, zinc, calcium, phosphorus, magnesium, and large amounts of potassium.

Watermelon is an excellent source of vitamin C and vitamin A, with one serving containing 14.59 mg of vitamin C and 556.32 IU of vitamin A (5.) A one-cup serving will provide around 48 Calories. It also provides significant amounts of vitamin B6 and vitamin B1, as well as the minerals potassium and magnesium, which have been shown to lower and aid the maintenance of low blood pressure (3).

Pink watermelon is also a source of the potent carotenoid antioxidant, lycopene and beta- carotene1, (2). Lycopene has anticarcinogenic properties and is a very potent antioxidant (free radical scavenger) in comparison to other carotenoids. The amino acid citrulline was first extracted from the fruit and analyzed (6). Citrulline is commercially available as a performance-enhancing dietary supplement, used by athletes to lessen muscle fatigue (7).

They contain a significant amount of citrulline and after consumption of several kilograms an elevated concentration can be measured in the blood plasma and this could be mistaken for citrullinaemia or other forms of urea cycle disorders (4).