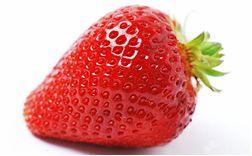 Strawberries, the world's most popular berries were an accident! Chilean berries were crossbred with North American berries by chance in Europe. In the early 1700s, a French engineer brought strawberry plants that were being cultivated in Chile back to Europe with him. These plants with large fruits were markedly different from the European varieties that were being cultivated at the time.

At first, the plantings did produce fruit so well, but all the transplanted plants were female, which easily crossbred with a neighboring field of the North American variety that was growing at the time. The resulting hybrid was sweet, juicy, and much larger than the European varieties. Naturally its popularity spread quickly.

Though they have grown in the wild in temperate regions for centuries, the Romans were the first to cultivate and cherish this luscious fruit. However, when Rome fell, most people forgot about them for a time. In the 12th century, a superstition that they were contaminated by toads and snakes convinced many people to avoid eating them. They were even considered poisonous in Argentina until the mid-nineteenth century.

The fruit reemerged in popularity during the middle Ages, but not as a culinary treat. The fruits of those days were smaller and not as sweet or fragrant as today’s berries, but they were valued for their medicinal qualities. Medieval doctors recommended them for everything from improving digestion, to correcting discolored teeth, and as a treatment for sunburn and gout.

Lovers were using the berries as an aphrodisiac as early as the 13th century. They were also a symbol of perfection, prosperity, and peace at medieval state events. Bernard le Bovier de Fontenelle, who lived from 1657 to 1757, claimed that they were the reason for his long life.

Strawberries have an impressive array of nutrients. In addition to being an excellent source of vitamin C and manganese, they are also a good source of folate, vitamin B2, vitamin B5, vitamin B6, vitamin K, and omega-3 fatty acids. The mineral profile of the fruit includes iodine, potassium, magnesium, and copper.

The berries also provide beneficial phytonutrients, such as flavonoids like kaempferol and pelargonidin (an anthocyanin), and phenolic acids like ellagic acid and gallic acid. They are also a source of phytoestrogens in the form of secoisolariciresinol. The many tiny seeds on the skin also contribute to their being a great source of dietary fiber.