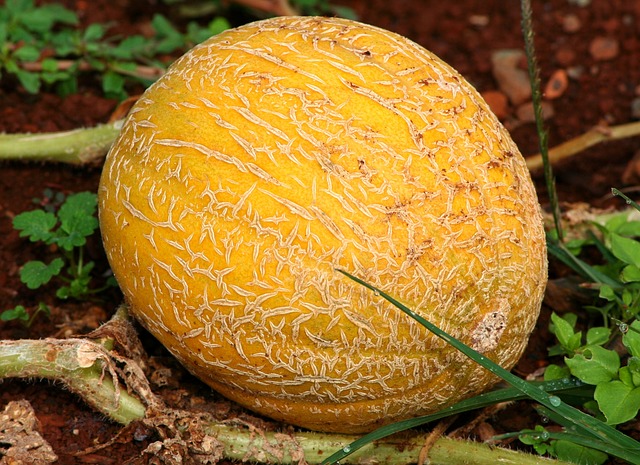 Cantaloupes are derived from the family of muskmelon known as Cucumis melo. Cantaloupes are also a part of the Cucurbitaceae family, which includes almost all squashes and melons. They are usually 15 - 25 centimeters in diameter and tend to be rounder looking than watermelons which are usually oblong. Not much different from any other melon, however, the cantaloupe grows best in sandy, well-aerated, and well-watered soil that is very distant from any type of weed that could damage it.

U.S. cantaloupe consumption has increased modestly in recent years, rising from about 6 to 7 pounds per person during the early 1970's to about 8 to 9 pounds during the early 1990's. This rise is due partly to the increased availability of imported cantaloupes during the winter and spring months, which are considered to be the off-season in the United States.

Good pollination is important for the quantity of fruits that are being produced and for the content of sugar that is contained within the cantaloupe. The United States Department of Agriculture (USDA) suggests that commercial plantings should have one beehive for every acre to assist with cantaloupe pollination. A fruit that is ripe will have a smell that is musky towards the end of the melon and at the stem. A fruit that is odorless tends to be tasteless as well.

New Zealand and Australia have nicknamed this melon the rock melon because the skin of this cantaloupe resembles that of a rock. The South Africans call the cantaloupe a spanspek, because that is the location from where they are harvested. In addition to its peculiar appearance, this type of cantaloupe is not considered the same as the family of cantaloupe that branches off from the muskmelon species.

The cantaloupe is a melon that has a firm, moderately sweet and orange flesh, with a rind that is lightly brown and thin. There are varieties of cantaloupes that have a more yellow and red flesh, but these types of cantaloupes are not so common. One reason for this may be because the more colorful types are known to be less flavorful than the variety.

The cantaloupe was originally cultivated during the 1700’s from seeds that were brought from Armenia. They were given the name Cantalupo, which is derived from a commune in Sabina near Tivoli, Italy. Tivoli is a city where the Pope resided in the summer. Pope Innocent XIII would enjoy a Port wine which contained a partially-hollowed melon as the aperitif. One of the most popular cantaloupes found in Europe is the Charentais, which is mostly grown in France.

Christopher Columbus introduced the cantaloupe to North America in 1494, during his second trip to the New World. And in 1881, a new type of melon was developed called the Netted Gym. The Netted Gym was produced from a variety of melons that were being grown in North America.

The surfaces of cantaloupes have different types of bacteria (especially salmonella), so it is recommended to wash the melon thoroughly before slicing and eating it. The best procedure for preparing cantaloupes involve disinfecting the exterior of the fruit with ethanol, but this approach is hardly ever used because of the risks of poisoning and the average person does not have ethanol in their homes.

Cantaloupe is eaten fresh almost exclusively. Cantaloupes are also consumed in ice cream desserts. A familiar form of modern antipasto is created by wrapping prosciutto in pieces of melons. This fruit is often consumed as a main course or as a dessert because of its sweet smelling and sugary interior. If not ripe when plucked, cantaloupes can be left in a warm room that is cool and dry until it ripens.

Cantaloupes are often used in fruit salads, pureed and added to soups, sliced, and served in yogurt or eaten raw with lemon juice and honey. The juice is sometimes mixed with water to make a variety of quite refreshing summer drinks. 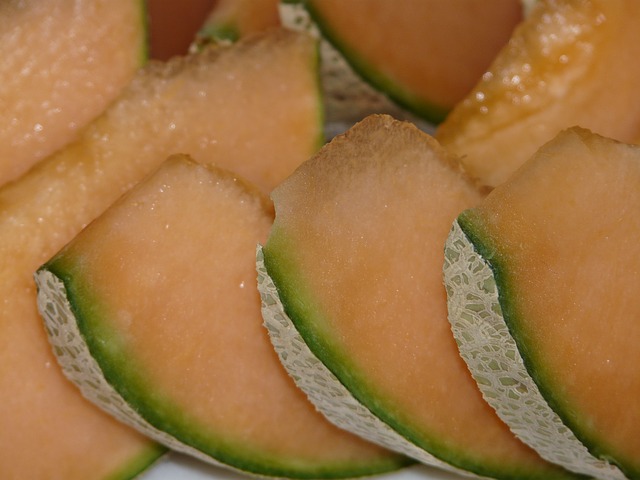 Cantaloupes contain vitamin C, A, E, K, B1, B2, B3, B5, B9, B6, and B12. Thiamin, riboflavin, niacin, pantothenic acid, and folate are other names for the B complex vitamins found in cantaloupes. They also contain potassium, folate, calcium, iron, magnesium, phosphorus, and zinc. Cantaloupes are also high in dietary fiber. See the following link for full details...

Cantaloupes are rich in polyphenol antioxidants. These are molecules that are known to improve the function of the immune and cardiovascular system (3). Polyphenols have also been shown to help control the regulation of nitric oxide, another important molecule that helps prevents heart attacks and strengthens healthy blood vessels (3).

Juicy cantaloupes supply the body with a large amount of beta-carotene and vitamin C (1), (2). On hot summer days or even after exercising, which is when people often become dehydrated, a serving of ice-cold cantaloupe can help replenish the body’s water content and electrolytes. It is important to maintain a constant level of water and electrolytes because once dehydration sets in physical and cognitive performances diminish. Dehydration also causes headaches, muscle cramping, dizziness, irritability, and fainting.

After one exercise session, the body can lose 2.5 liters of water per hour, which can cause a loss of electrolytes like potassium and sodium. The loss of electrolytes impairs the function of vital organs like the heart. Eating fresh fruits like cantaloupes can help replenish our body’s supply of water and nutrients naturally. Certain extracts from the cantaloupe have also been shown to stimulate diuresis, which lowers blood pressure (4).

In 1941, a very moldy cantaloupe was found in the Peoria market that contained a high amount of high quality penicillin (3). Nowadays, penicillin is a commonly prescribed antibiotic. This antibiotic, which is commonly found in different types of soil-inhabiting fungi, exhibits bactericidal and bacteriostatic effects on susceptible bacteria. Penicillin prevents the formation of the bacterial cell wall and therefore reduces bacterial replication. In the last few decades the development of antibiotics like penicillin has made a tremendous impact on the control and treatment of bacterial infections.