So juicy and delicious when they are ripe and bursting with goodness. I like to keep a few in a bowl so that there is at least one ready to eat.

They belong to the genus Pyrus and is thought to have originated in present-day western China in the foothills of the Tian Shan Mountains. The fruit appears to have spread to the east and west along mountain chains and evolved into a diverse group of over 20 widely recognized primary species. Other sources suggest that they are native to coastal and mildly temperate regions of the Old World, from Western Europe and North Africa clear across Asia.

The best North American growing districts are in California, Washington, Oregon and to a lesser degree, the northern United States from New England to the Great Lakes and southern Canada. They are grown extensively in home orchards in the United States.

The English word pear is probably from the Common West Germanic word “pera”. It may also have been taken from the Vulgar Latin word “pira or pirum”.

The European variety (pyrus communis) comes from the wild pyrus pyraster and pyrus caucasica species, which can be commonly found as natural vegetation in many forests throughout Europe. Its cultivation extends to the remotest antiquity. Traces of the fruit have been found in the Swiss lake-dwellings, it is mentioned in the oldest Greek writings, and was cultivated by the Romans.

A certain variety, with white on the under surface of their leaves is supposed to have originated from pyrus nivalis and their fruit is chiefly used in France for the manufacturing of Perry (Cider).

Other small-fruited varieties, distinguished by their precocity and apple-like fruit, may be referred to as pyrus cordata. This species is found wild in western France, in Devonshire, and in Cornwall. Pears have been cultivated in China for approximately 3000 years.

The trees are medium sized, reaching 10-17 m tall and often have a tall, narrow crown. A few species are shrubby. The leaves can be green and glossy on some species or hairy and silver on others. The leaves are typically 2-12 cm long and vary from very broad to narrow and are arranged alternately.

Most varieties are deciduous, but one or two species in Southeast Asia are evergreen. In addition, most trees are cold-hardy and can endure temperatures anywhere from -25 °C to -40 °C in the winter. The evergreen species, however, cannot tolerate temperatures lower than -15 °C.

The flowers are white, rarely tinted yellow or pink, 2-4 cm diameter, and have five petals. Like that of the related apple, the fruit is a pome and in most wild species is 1-4 cm diameter. The flowers can be up to 18 cm long and 8 cm broad in some cultivated forms.

It is also very similar to the apple in cultivation, propagation, and pollination. There are about 30 primary species, subspecies, and hybrids that have evolved naturally.

They may be readily produced by sowing the pips of ordinary cultivated or wild varieties. These usually form what are known as free or stocks, on which the choicer varieties are grafted to increase crop number. In some Eastern cultures. They are also known as the fruit of planning.

People who consume them are believed to have superior organizational skills. Commercial fruit production in the United States averages about 700,000 metric tons annually. Most varieties may be grown in either standard or dwarf sizes.

They are most often eaten fresh, straight off the tree, or used in salads or in deserts. They are also canned, juiced, and dried. Fermented juice, also known as perry, is often combined with other berries and fruits to make jelly and jams.

One little known fact about them is that they will ripen faster if placed next to bananas in a fruit bowl. They stay fresh for longer if kept in a fridge and antioxidants they contain can prevent the browning of fruits their extracts come in contact with (3). 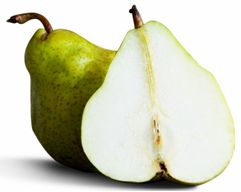 They are a good source of riboflavin, niacin, thiamin, pantothenic acid, folic, vitamin C, B6, A, E, and dietary fiber in the form of pectin.

They contain about 16 percent carbohydrate and negligible amounts of fat and protein (6). They are good sources of the B-complex vitamins and also contain vitamin C (2). They also contain small amounts of phosphorus and iodine (1) as well as a glycoside called arbutin that has been used to treat urinary-tract infections (5).

They are the least allergenic of all fruits. Along with lamb and soya formula, they form part of the strictest exclusion diet for allergy sufferers (4). The wood is one of the preferred materials in the manufacture of high-quality woodwind instruments and furniture. It is also used for wood carving, and as firewood to produce aromatic smoke for smoking meat or tobacco.