I first ate fresh pineapple in Hawaii many years ago, so yummy. Unfortunately I had too much and the acidity caused a rash around my mouth for a day or two. Since then I take the opportunity to eat them fresh whenever I can, including in Tahiti and Queensland. They taste so different when fresh compared to store bought fruit, and the juice is great!

They contain a large percentage of vitamins C and manganese. They contain smaller amounts of B1, A, B6, E, copper, bromelain, and dietary fiber (1). 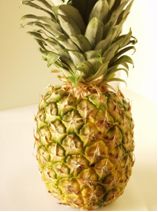 Bromelain is a proteolytic enzyme found in them that breaks down protein in food and promotes digestion (3). For this reason, the juice is often used as a meat tenderizer and made into marinades.

Some have claimed that it has potential benefits for the treatment of some intestinal disorders while others claim that it helps to induce childbirth when a baby is overdue.

The root and fruit itself are either eaten or applied topically as an anti-inflammatory agent and as a proteolytic agent (3), (5), (6). It is traditionally used as an anti-helminthic agent in the Philippines (4). A root decoction is also used to treat diarrhea.

It was originally grown in South American and today is grown worldwide. Southeast Asia is the world’s leader in the production of the fruit. 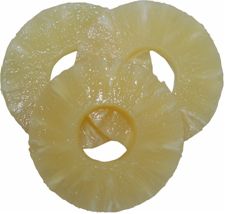 Charles II was presented with the first one that was grown in England. This can be seen in a 1675 painting by Hendrik Danckerts. It spread from its original area in central South America through cultivation and by the time of Christopher Columbus (1492) and it grew throughout South and Central America, southern Mexico, and the Caribbean (West Indies).

Columbus may have taken a sample back to Europe. The Spanish introduced it in the Philippines. It was introduced during the early 19th century in Hawaii and Guam as the first commercial plantation in 1886.

The fruit was successfully cultivated in European hothouses and pits during the beginning of 1720. The most common varieties now include: Pernambuco, Red Spanish, Smooth Cayenne, Hilo, St. Micheal, Natal Queen, and Kona Sugarloaf. Smooth Cayennes are usually the commercially available canned variety (1).

Cultivation in the USA began during the early 1900s in Hawaii. The famous  brand names “Dole and Del” were founded on the island of Oahu in 1901 and 1917. Another famous company, known as the Maui Pineapple Company was founded in 1909 when they started cultivation. (2).

The fruit (Ananas comosus) is a tropical plant that is probably native to Uruguay, Brazil, or Paraguay. The herbaceous perennial plant is tall (1-1.5 m) and has 30 or more trough-shaped and pointed leaves that are 30-100 cm long.

The plant is surrounded by a thick stem. It is a multiple fruit, meaning it has many, flowers arranged spirally along the axis and each flower produces a fleshy fruit that presses against adjacent fruits that are growing and form one fleshy fruit. The leaves of the Smooth Cayenne cultivar lack spines except at the leaf tip, but the Spanish and Queen cultivars have large spines along the leaf margins. They are the only bromeliad fruit in widespread cultivation (1).

Certain bat-pollinated wild fruit, members of the bromeliad family, do the exact opposite of most flowers by opening their flowers at night and closing them during the day; this protects them from weevils, which are most active during daylight hours.

Most often eaten fresh, they can also be used to make juice, jams, jellies, salads, ice cream, cakes, and pies. They are also added to a variety of foods such as pizza and meats. Fruit slices are also placed on the rim of cocktail glasses, found in various mixed drinks, and combined with numerous fruits in multivitamin beverages.

The primary exporters of the fresh fruit in 2001 were Costa Rica, 322,000 tons; Côte d'Ivoire, 188,000 tons; and the Philippines, 135,000 tons. In commercial farming, flowering can be artificially induced and the early harvesting of the main fruit can encourage the development of a second crop of smaller fruits.